The right approach to segmentation can drive sales and improve return on investment. We worked with Tennessee Performing Arts Center on a segmentation strategy which increased sales and revenue.

With the right segmentation in place, an effective customer relationship management (CRM) strategy should easily follow. Based on key behaviours, segment definitions relate directly to objectives. For example, a segment of frequent low-price bookers might be better targets for a low-price frequency package than a segment of high-price occasional bookers.

Behavioural segmentation, driven by what each customer purchases, allows you to identify and target those most likely to respond to particular messages. This means organisations no longer have to send out generic marketing messages to everyone on their database and can instead communicate in a much more personal and nuanced way with their customers.

This might be more work in the short term, but the right approach can have massive rewards and achieve a significant return on investment (ROI). With the right segmentation in place, you can decide who gets the expensive, glossy season brochure posted to them, who’d be better off with an electronic guide sent via email, or who’d be most likely to respond to early-in-the-season promotions.

We have been working with our US partners, JCA Arts Marketing, to create and implement a custom behavioural segmentation for Tennessee Performing Arts Center (TPAC) using the Segmentation Engine. TPAC used the segmentation to drive its subscription acquisition campaign by tailoring messages to specific customer segments, resulting in a 41% increase in new subscription sales and a 1,615% increase in marketing ROI.

Baker Richards and JCA Arts Marketing have worked with TPAC for a number of years, acquiring a strong understanding of their overall aims and objectives and in-depth insights into their audience through the data analysis.

As a leading arts centre, TPAC serves hundreds of thousands of audience members each year with a broad mix of programming, including a Broadway at TPAC series, a TPAC presents series and a variety of events in the War Memorial Auditorium (WMA).

Starting with an analysis of the audience in relation to the different programming strands on offer, as well as splitting out the different types of subscriber (fixed and flex) and groups (corporate, standard, student), we were able to identify the key variables that would be used to drive the initial segmentation.

This first design of the segmentation was presented to TPAC along with the findings from the analysis and was refined in consultation with them to create a final model consisting of 12 segments. The final segments included:

The segments were then implemented in the Segmentation Engine, allowing TPAC to overlay additional variables against each of them. This built up a more complete picture of customer behaviour in relation to price, time of booking, subscription, donation and so on.

Having implemented a dynamically updating segmentation, TPAC could now begin using it tactically to communicate more effectively with its customers. Working with Timmy Metzner at JCA Arts Marketing, TPAC devised a strategy targeting key segments for subscription acquisition. TPAC uses printed materials sent in the post to help conversion for such an important element of their campaign, so ROI was particularly important.

Using the Segmentation Engine to understand the behaviour, the following segments were identified as most likely to subscribe: 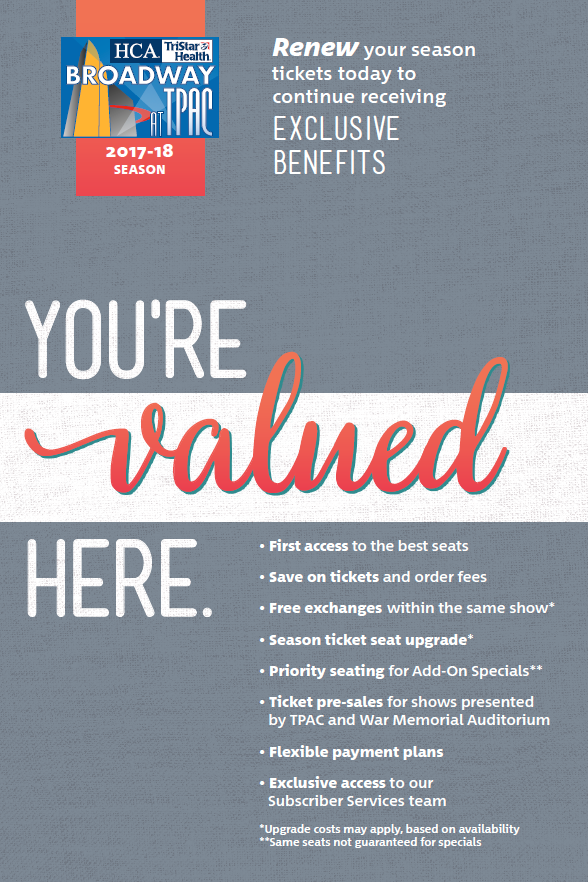 A Flexible Package mailer was sent out to the Regulars, but using additional filtering in the Segmentation Engine only to those with an average ticket spend that was within the high to mid range. 179 households responded (3.5% response rate), generating another 420 packages, worth $113,810 giving an ROI of 5,344%.

A postcard promoting a Flexible Package was sent to patrons with lower engagement and frequency (Regulars with a lower average ticket spend, as well as Dabblers and Oncers). The response rate was somewhat lower, at 1%, but that still generated another 396 packages, worth $101,166.50 giving an ROI of 1,615%.

We can see that in 2017–18 subscription acquisition mailers were sent to 87,886 fewer patrons than the previous year, saving nearly $10k in costs, but bringing in an additional $22,313 with more households responding and packages sold. The total response rate increased by 533% and ROI increased by 211%. By analysing customer behaviour to segment your audience, it is possible to greatly increase revenue while reducing costs.