The Pricing Playbook is a decision-making guide that helps you implement marketing and pricing actions on a weekly basis in response to demand.

Getting pricing exactly right for every seat, for every performance before you go on sale is difficult. However, with enough historical data and experience, we can make pretty good predictions about how we expect a show to sell (see Forecasting).

A simple ‘ABC’ approach as shown in the table below is one method of establishing your initial pricing set-up and a sales target for each show.   Objectives (social as well as financial) and tactics are then associated with each rank.  For the strongest sellers – the ‘A’ inventory – it might be all about maximising income, with tactics focused around higher prices, limiting discounts, dynamic pricing and premium add-ons. At the other end of the scale, the financial objective for the difficult inventory might be all about increasing the volume of ticket sales, with tactics centred around lower prices and a targeted discount strategy. Rank ‘C’ inventory could also have a social objective about encouraging particular types of audience, e.g. young people, by offering them bigger discounts. 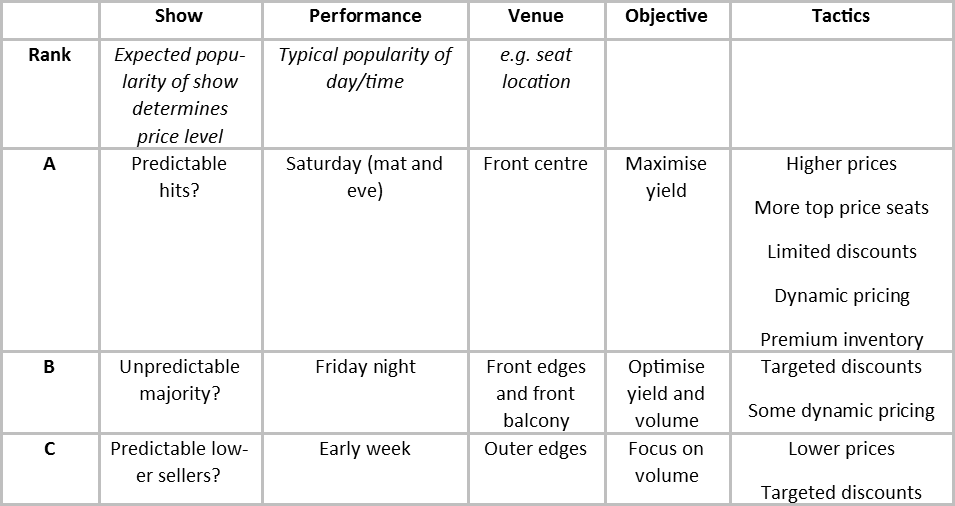 The above model helps with initial set-up, but using forecast trajectories based on historical comparators will also provide weekly sales targets.  This gives you much richer information as you know if you’re selling better or worse than expected.

These weekly sales targets mean you can plan your sales tactics in advance, turning them into a ‘Pricing Playbook’. The Pricing Playbook is your decision-making guide throughout the sales cycle.  For example, when a performance hits 10 weeks out and it’s selling strongly the Pricing Playbook will tell you exactly what action to take; equally when a performance is struggling you’ve got planned actions to address this rather than having to firefight with a knee-jerk response such as last-minute indiscriminate discounting.

In 2016, Baker Richards worked with the Metropolitan Opera in New York on a pricing and segmentation project, which included the creation of a ‘Pricing Playbook’ and interactive model for tracking sales for their 2016-17 season.  Using historical data stretching back over 4 years (prior to this there was a different pricing strategy in place), we were able to create 5 types of sales curve.  Because the Metropolitan Opera release their entire year of productions at once through a series of priority booking periods for Patrons, Members etc. it was important to reflect the fact that sales for the opening weeks for a performance in September (at the start of the season) would be different from those for a performance in March of the following year.

These historical comparator groupings formed the basis of the tracks that future sales would be measured against. But even before performances went on sale, each of the tracks was linked with a planned strategy, e.g. performances on the highest track would be allocated the highest price schedule (there were 3) with more top price seats (variable scaling) and restricted discounts.

We could match these up with the forthcoming repertoire on a performance by performance basis, assisted by Repertoire Scoring to inform Forecasting, adjusted by experience so that every performance had a final sales target.

After this we came up with a long list of possible actions that could be implemented at various points throughout the sales cycle to either maximise income for performances following the higher tracks or increase volume for performances on the lower tracks, subject to how demand was unfolding. This list was then narrowed down to the following actions:

The table below shows a section of the resulting matrix of actions by weeks out and track.

The other important thing to note about this approach is that if sales go above or below what is expected, then a performance can switch tracks.  For example, something which is selling better than expected might move from track 3 to track 2 and as a result have more dynamic pricing applied. Something that’s performing below expectation might get more discount promotions.

Using this approach, the Metropolitan Opera are able to focus their marketing on a weekly basis, responding to demand with a list of planned actions, which the team are able to quickly implement and thus avoid missed opportunities.

We have engaged Baker Richards on multiple projects including pricing, membership research and segmentation.  The work is always detailed, comprehensive and of a genuinely high standard, combining a detailed specialist knowledge of data interrogation with an in-depth understanding of our individual circumstances. Most importantly, we have thoughtful, enthusiastic and robust debates to inform on-going strategy and practical implications of the findings!
Gillian Brierley, Assistant General Manager, Marketing and Communications at Metropolitan Opera House