New research undertaken by The Insights Alliance (Indigo Ltd, Baker Richards and One Further) reveals that:

Overall, net confidence attending live cultural experiences in person in the future stands at +47%*, with significant age variation.  The confidence score for people aged under 45 is +56%, however this drops to +36% for over 65’s.

When asked when they expect to start booking for events again, 45% responded that they would start booking within six months, 39% were not sure, and 13% said it would take more than six months. Only 3% said they had no plans to book at all.

The research suggests the Government and industry will need to make a concerted effort to persuade audiences that “Operation Moonshot” – rapid, mass testing – is an adequate alternative to social distancing measures.  When asked “How would you feel about the following measures being considered or implemented by some cultural organisations?”

21% of respondents said they could not envisage attending until a vaccine or rapid test was readily available.  This proportion has increased from 14% in the After the Interval: Act 2 survey undertaken in June-July. 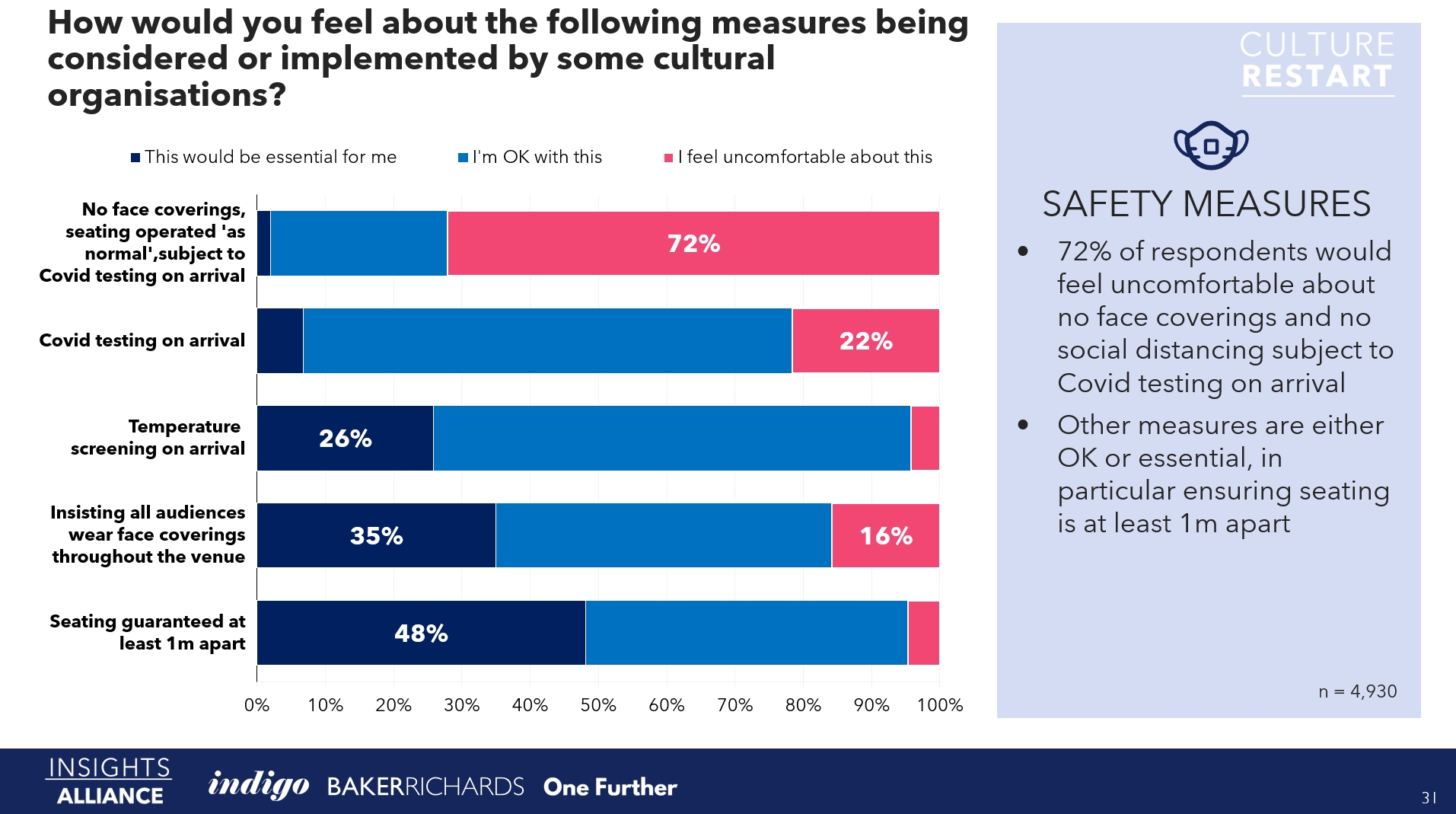 56% of respondents said they had engaged with culture online since venues closed in March 2020, with 41% saying they were interested or very interested in engaging with digital content in the future.

More than half – 56% of respondents – expect to pay less for digital than for a live event, though only 12% expect digital culture to be free.

23% said they were likely to both engage with and pay for digital culture in the future.

61% of those interested in engaging online said they were less likely to engage with digital culture once they can return to live. However, they would still consider watching events online that they otherwise wouldn’t have a chance to see – this suggests a significant potential market for paid-for digital in the future. 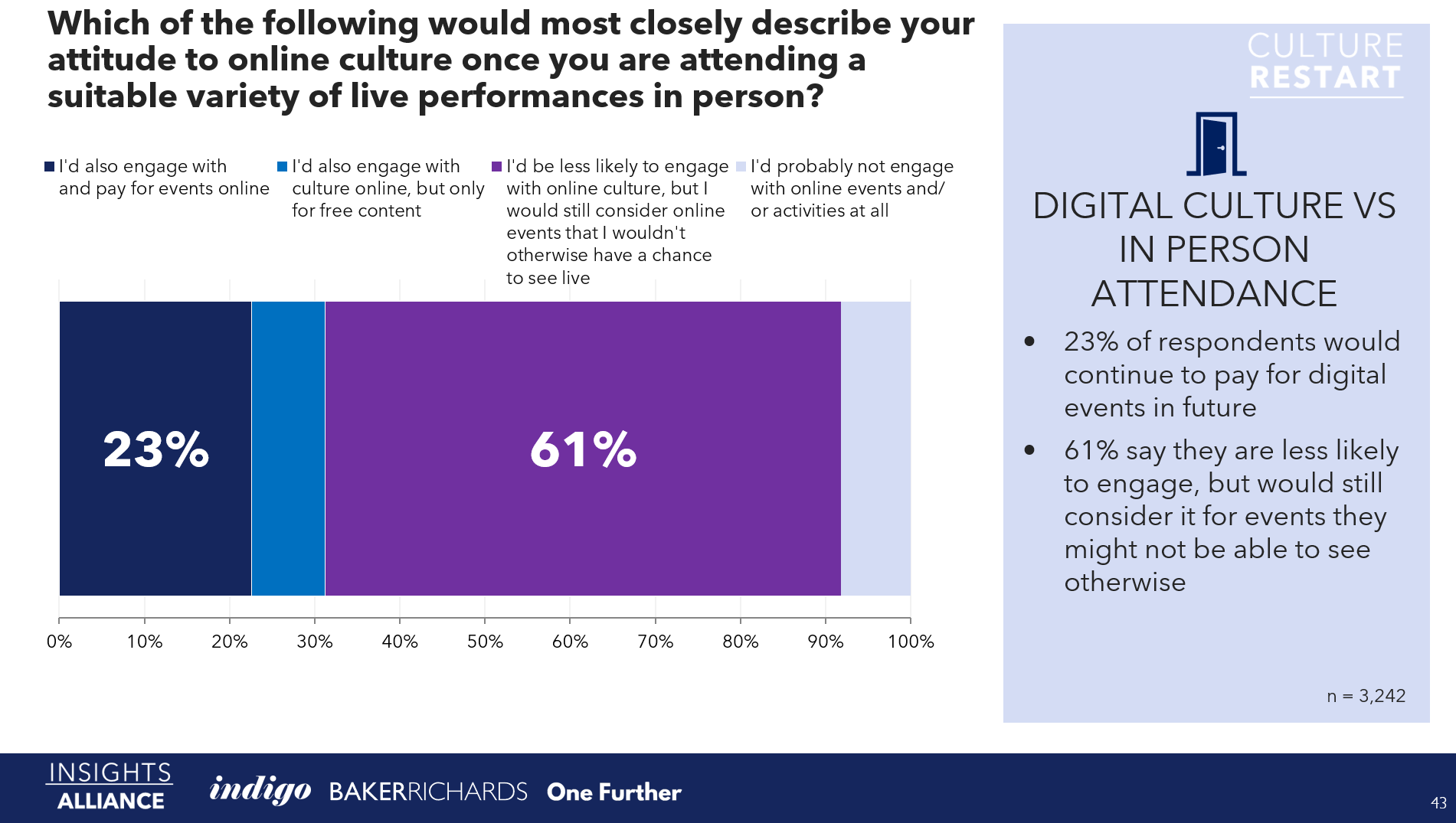 During lockdown, respondents have demonstrated their keenness to return to culture by switching their participation to those cultural experiences which are available – there have been substantial shifts towards cinema, heritage sites, visual arts and outdoor arts.  Advance booking demand into 2021 and beyond is strongest for musical theatre, popular music, and comedy.

The Culture Restart Audience Tracker is the successor to Indigo Ltd’s After The Interval sentiment tracker. It will report on the sentiments and confidence of audiences and visitors every month until the Spring of 2021.  Baker Richards are providing analysis of the data, and future results will be shared in an interactive dashboard created by One Further.

This first wave reports on fieldwork from cultural organisations including theatres, arts centres and touring companies across the UK during October 2020, and does not cover London and the West End. 72% of respondents usually attend culture four or more times per year.

“This research captures audience sentiment before the positive news of possible vaccines was announced. It doesn’t cover the West End where we have already seen that some productions are able to generate healthy advance booking for non-socially distanced performances.

There remains a big opportunity to make paid-for digital a complementary part of the culture-going experience for loyal attenders.  This opportunity should not be lost as plans increasingly focus on a return to live.”

“It’s great news that overall, respondents remain confident about returning to live culture when it is safe to do so, and this is testament to the hard work of cultural organisations and their clear communications.

The recent positive news surrounding vaccines is very welcome, though only 21% said that a vaccine was essential to their return – where it is financially viable, loyal audiences are willing to attend Covid secure venues ahead of a vaccine.

Our data does not yet point to a return to normality as early as Easter 2021. The government have more work to do to persuade audiences that rapid testing is a viable alternative to social distancing and mask wearing, but over time vaccination may be a game changer. We will track these sentiments in future months.”

“This research points to an ongoing market for digital content, even after live events return.  We are still at the beginning of a fundamental shift in which producers and venues can work together in new ways to generate audiences for digital content which are not constrained by geography.

Digital production has the potential to be of particular importance to vulnerable audiences who remain reluctant to return to live for the foreseeable future.”

The Wave 1 report can be downloaded here. 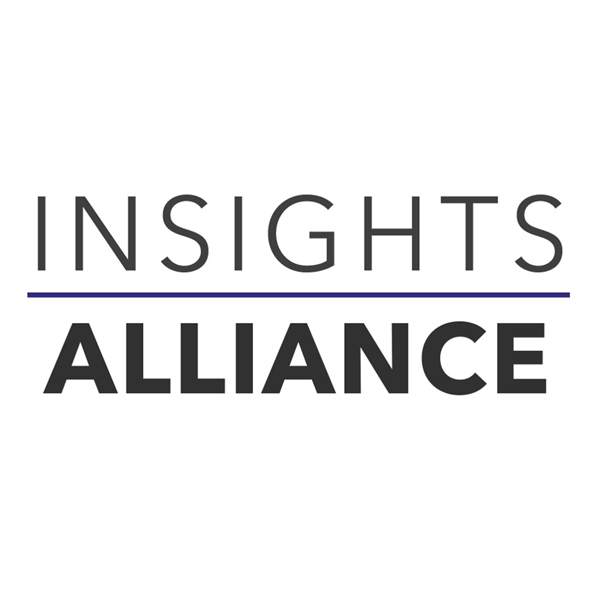