The second wave of responses to the Culture Restart audience tracker (delivered by the Insights Alliance – Indigo Ltd, Baker Richards and One Further) shows that:

23% of respondents have attended a cultural event since reopening, with Under 35s most likely to have returned.

For those who have already attended an in-person cultural experience, net confidence for attending in future is currently at +54%*, an increase from +47% in October. In fact, confidence has increased across all age groups in November.

For those who haven’t yet booked, the proportion who now say they would be willing to book within the next 6 months has increased from 45% to 54%.

There has been a 5% increase to 92% in the proportion of respondents in November who intend to maintain their pre-Covid levels of attendance or attend more often in future. 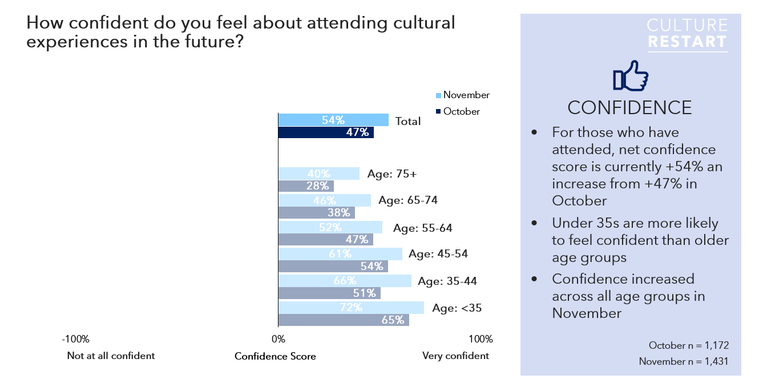 Waiting for a vaccine

When asked how they’re currently feeling about coming out to events at a venue again, the proportion of those who said they could not envisage attending a cultural event until a vaccine, treatment or rapid test is readily available has grown from 14% in July to 25% in November.

Of those who haven’t yet attended, 57% said this was because they were avoiding interacting with crowds of people. However 41% said there simply haven’t been enough cultural opportunities on offer.

For those willing to return, safety measures in cultural venues remain important, particularly ensuring seating is at least 1m apart.

The proportion of respondents who said they were very interested or interested in digital culture has decreased slightly from 41% in October to 38% in November. Interest is consistent among age groups.

However, of those who are very interested, interested or neutral, 65% are willing to pay for digital cultural experiences – up 3% from October. 22% said they would continue to pay for digital content, even when they could attend in person – and a further 62% would still consider it for events they might not otherwise be able to see.

Under 55s are more likely to engage with and pay for online events in future. 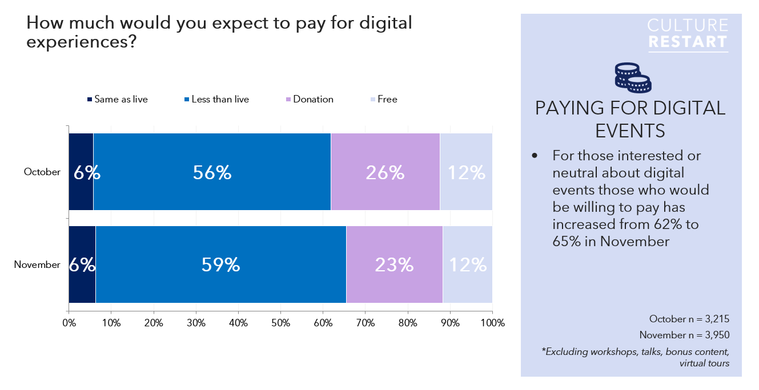 The Culture Restart audience tracker is the successor to Indigo Ltd’s After the Interval sentiment tracker. It will report on the sentiments and confidence of audiences and visitors every month until the spring of 2021. Baker Richards are providing analysis of the data, and future results will be shared in an interactive dashboard created by One Further. Find out more

This second wave reports on fieldwork from cultural organisations including theatres, arts centres and touring companies across the UK during October and November 2020, and does not cover London and the West End. 71% of respondents usually attend culture four or more times per year. There have so far been 11,833 responses from 42 participating cultural organisations.

“Although levels of confidence are improving overall, the vaccine announcement in November has coincided with an increase in the proportion of audiences waiting for a vaccine before returning, with the increase seen most keenly in older respondents. Depending on the speed of vaccine roll out, some cultural organisations may need to prepare for their generally frequent and loyal older audiences to be unwilling to return until the vaccination has reached them.

“However, a small growth in the willingness to pay for digital – particularly for content created to be consumed online – suggests this could be an alternate revenue stream during and beyond the pandemic.”

“It is very encouraging to see growing levels of confidence in those who have attended events – a testament to the hard work cultural organisations have put in to making their venues safe for audiences to return, and building confidence ahead of visits.

“Our latest research shows an increase in the proportion of loyal attenders willing to return with the right safety measures in place, and a positive intention for their future booking and spend habits. As cultural organisations face further periods of closure and restrictions, we will continue to track the impact on audience confidence levels.”

“Our second wave of findings shows a strong ongoing appetite for digital cultural content – across all age groups – with cultural attenders more likely to engage with and pay for events which are live, interactive or have been created specifically for an online audience.

“With only 8% of respondents saying they wouldn’t engage with culture online when they are attending again in person, there is a real opportunity for cultural organisations to be bold with their online strategy, curating varied programmes of events for a range of audiences.”